The Complete Guide to Nightlife in Paris: Bars, Clubs, Shows…

Do you want to enjoy your nights like a real Parisian during your trip to Paris? Learn about the trendiest nightlife districts in Paris, and also bars, clubs, restaurants and general tips for a vibrant night out in the Parisian scene. Enjoy!

What Do I Need to Know?

Paris is a world class city! The French capital, also known as the City of Light, offers its visitors a wide range of options, from bars to noble cabarets and casinos.

Behind its artistic and cultural heritage, Paris also hides a young soul, which is reflected in its vibrant nightlife. The nightlife usually starts at 10 p.m. and continues until sunrise.

There are places to go out for every budget, from cosy and reasonably priced pubs, to noble trendy bars and to sinfully expensive nightclubs and discos. Here you should pay attention to the dress code, because many have a strict door policy. Most locations are open daily all year round, but some open-air clubs are only open in the summer.

For several years now, electro clubs have been on the rise in Paris as well. The quality is first class, some are even open 24 hours a day. Those who don't like disco go to a pub, a bistro, visit a cabaret or a classical concert or try their luck at the casino.

Casinos: There are several casinos that offer poker, baccarat and blackjack. Instead of roulette, Le Multicolore is played, slot machines are only available in Barrière, 20 minutes out of Paris. Entrance fees vary, and the casinos are open until at least 4 am. The most popular in Paris is Cercle Haussman, close to Opera Garnier. 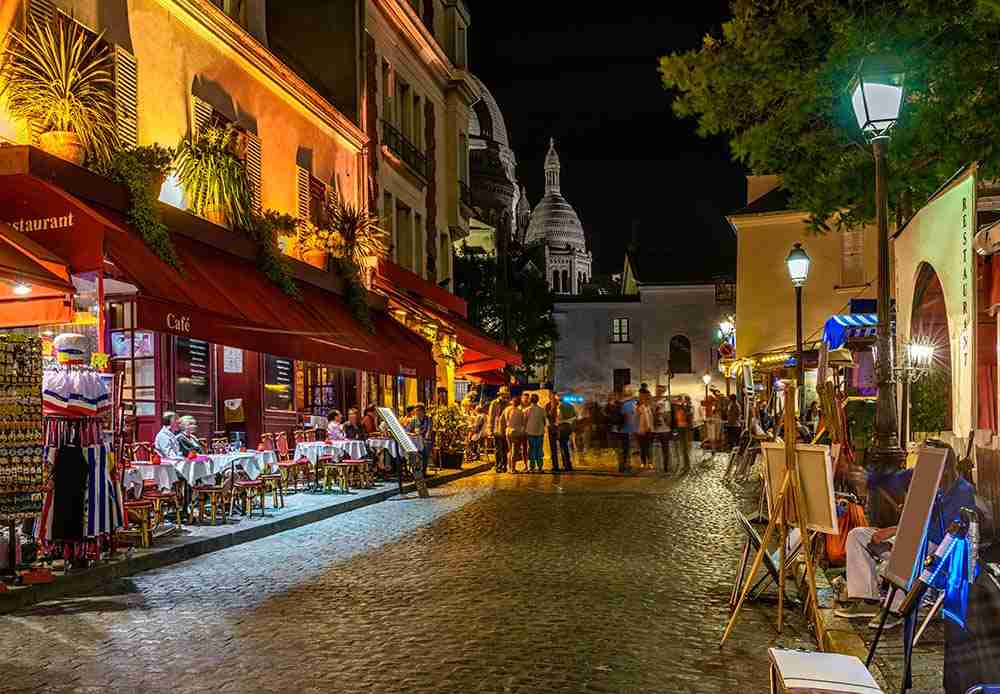 1. Montmartre for a Show

With its cobbled streets, artists and bistros, Montmartre exudes an incredible charm. High up on the hill in the 18th district, the most famous quarter of Paris has lost none of the village charm that so much pleased artists in the 19th and 20th centuries.

Today, this area is very lively and thanks to the many clubs and pubs with good wine, local cuisine and live music, it is frequented until late at night by locals and tourists alike, who enjoy the view of Sacré-Coeur Basilica while going out.

On the outskirts of Montmartre you will find the famous Moulin Rouge.

In the immediate neighborhood is the amusement district with the same name around Place Pigalle, which enjoys a rather dubious reputation. 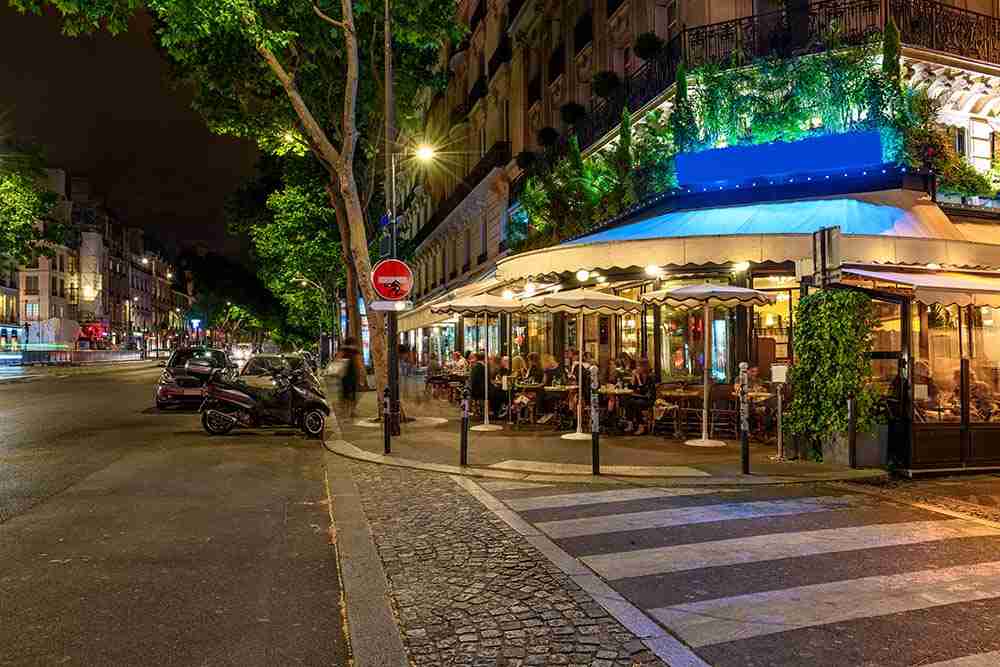 Saint-Germain is the district with the cozy atmosphere that, despite the luxury boutiques, is still popular with students, who come to one of the numerous corner bars to have a drink.

Apart from small pubs with moderate prices, you will also find just as many trendy places
and gourmet restaurants, several of which are worth a trip.

In addition to restaurants offering Italian, Spanish, Portuguese and, of course, French specialities, there are numerous wine cellars, fish restaurants and trendy restaurants, as well as elegant bars, eateries and gourmet restaurants that invite you to dine. 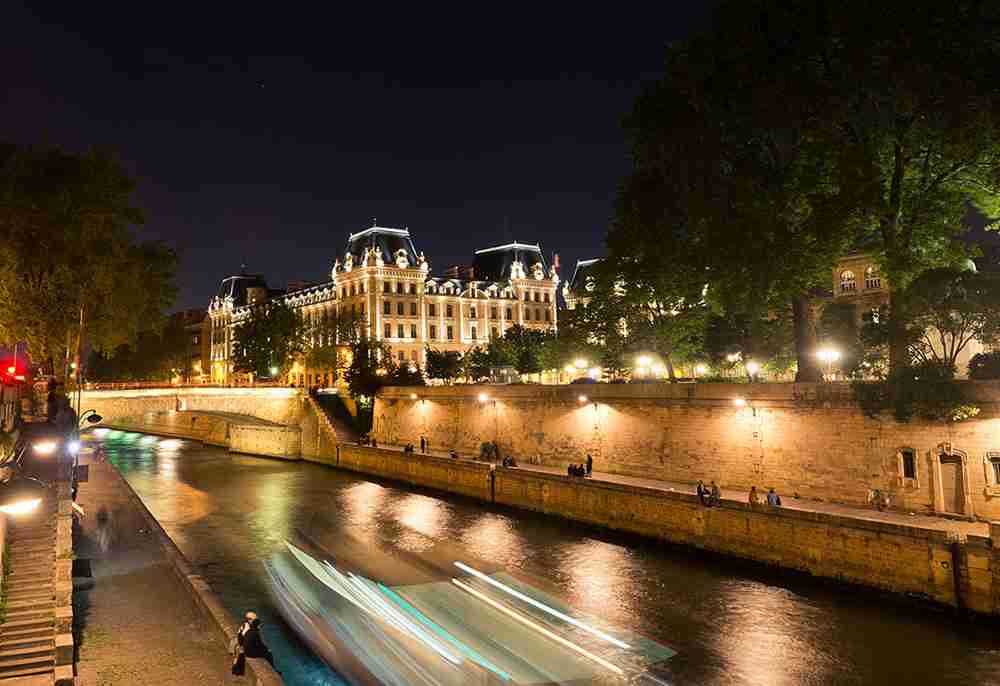 The boarding point is at the foot of the Eiffel Tower, where most boats leave. The City of Lights, as Paris is also called, is even more impressive and imposing at night from the water. A boat trip on the Seine through the illuminated Paris is an unforgettable experience.

The journey takes about 2.5 hours. While famous sights such as the Eiffel Tower, the Louvre and the Ile de la Cité glide past the window of the glass boat, you can enjoy your meal undisturbed.

Champagne and live music are included, French people know how to enjoy life... 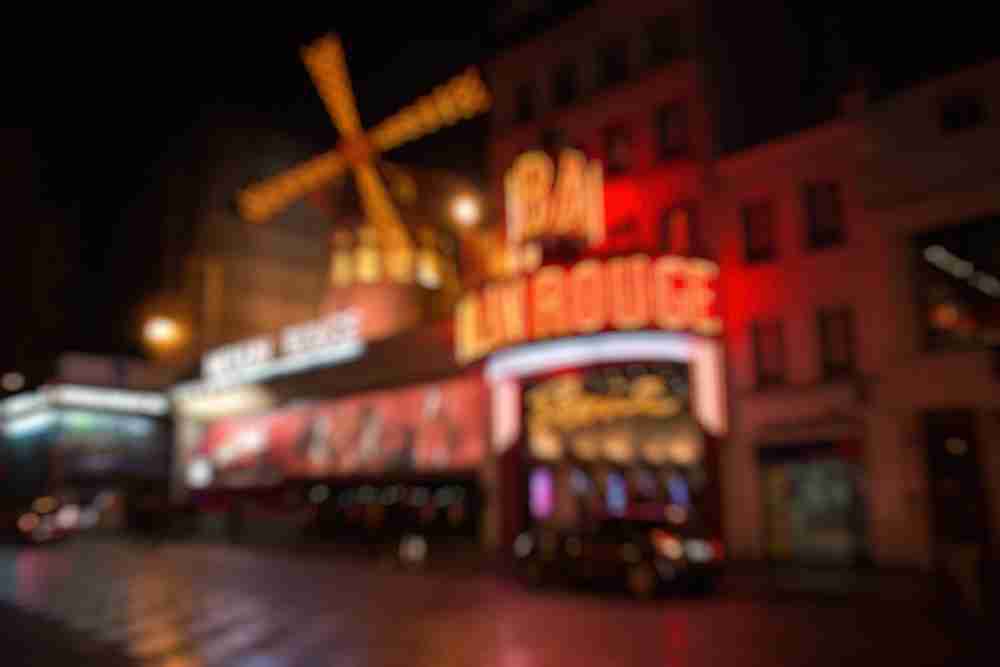 The impressive cabaret shows and revues in Paris are world-famous. One of the most famous is undoubtedly Moulin Rouge, founded in 1889 in the Montmartre district of Place Pigalle. With its Can Can dance numbers it was a model for numerous other cabarets.

The Crazy Horse on Avenue George V is more of a variety than a cabaret, which became famous for its permissive dancers. Pantomimes, jugglers and magicians also perform there.

The Lido revue theater was founded in 1946 and is established in a former swimming pool on the Avenue des Champs-Élysées. The auditorium has a capacity for 1150 spectators, and international stars perform here time and again.

You can get tickets to these shows in advance in our Paris Tickets Shop with the links below. 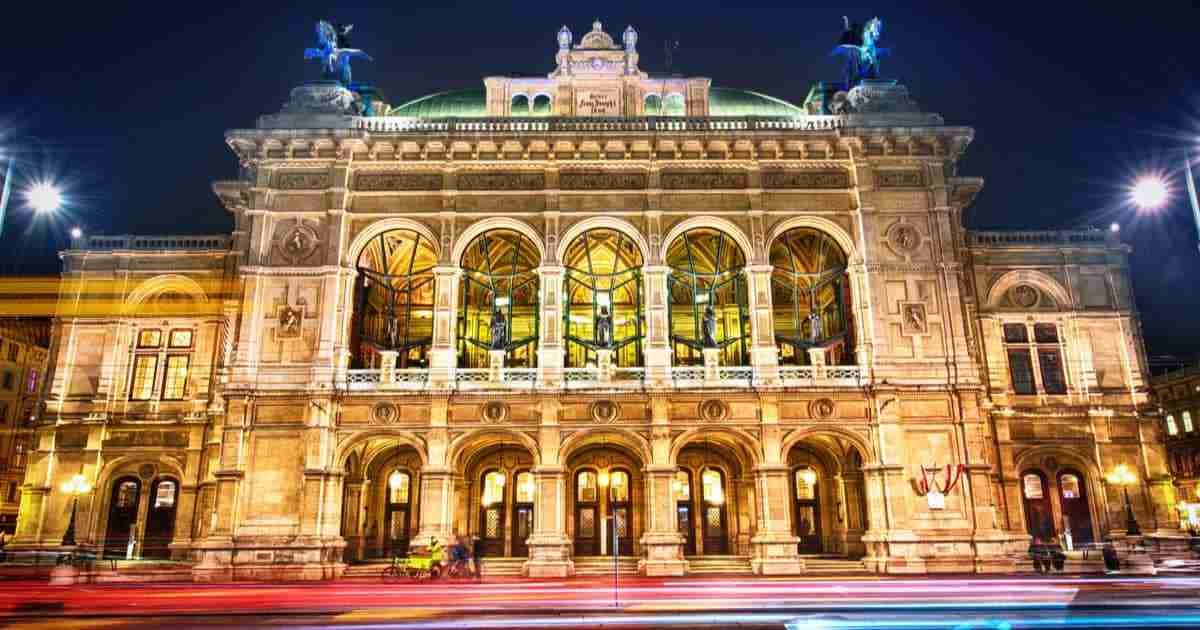 The range of classical music offered in Paris is also huge.

The most famous operas, operettas and tragedies in history are performed in the legendary hall of the Opéra Garnier, built in 1875 by Charles Garnier. The modern Opera Bastille, first opened in 1989, has a unique interior with 2700 seats and impresses with perfect acoustics.

The Opéra-Comique is especially focused on the genre of comic opera, spoken theater, occasionally interrupted by songs.

If you want to hear a classical concert, go to the Philharmonie de Paris, the Théâtre des Champs-Elysées, the Seine Musicale, the Auditorium du Louvre ,or the Maison de la Radio. All of these halls have top-class acoustics.

Many churches also regularly hold classical concerts, including Saint-Germain church, the Cathedral of the Invalides and Notre-Dame.

There are also numerous other stages offering programs that are as high quality as they are varied. 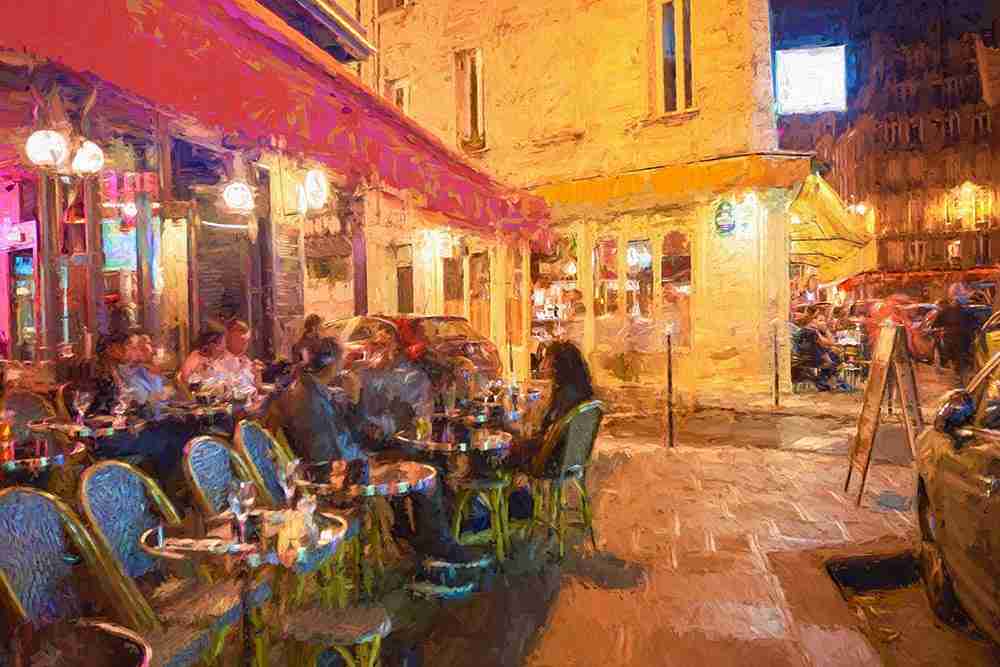 Located at the crossroads of the 4th, 11th and 12th arrondissements, the Bastille district has many sides,
popular, bohème, and artsy. With countless cafés, bars and restaurants there is something for every taste.

Bistro atmosphere, a bar hidden behind the fridge of a pizzeria, 50s style bars, and a bar where you can get your hair cut...
I

n parallel, there are of course the very classic bars and bistros on the sidewalk, where you can simply relax.

If you get hungry, go to one of the gourmet restaurants or order baguette, cheese and red wine in a bistro. 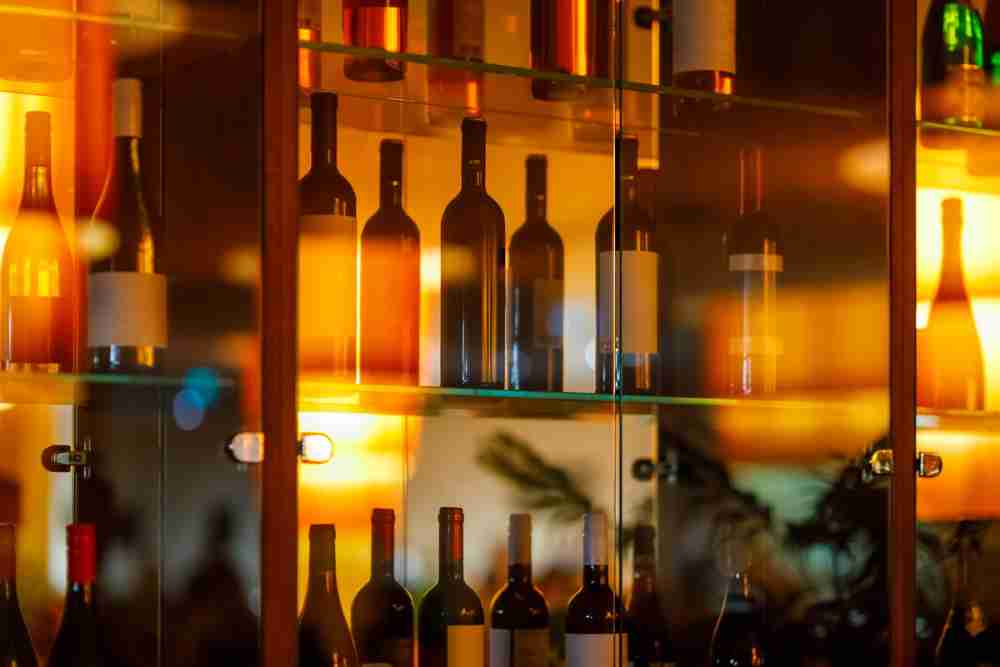 In French wine country, wine is everywhere in cafés and bistros. Bars specializing in wine have only recently begun to spring up in every district.

They present an almost complete selection of the 1001 different tastes of wine, including rare and excellent wines, Mediterranean wine regions, and vineyards in Burgundy, with white, red or rosé.

And if you don't drink alcohol, go to one of the water bars that have recently become famous and test the different tastes of mineral waters from all over the world, including still, sparkling and flavored... 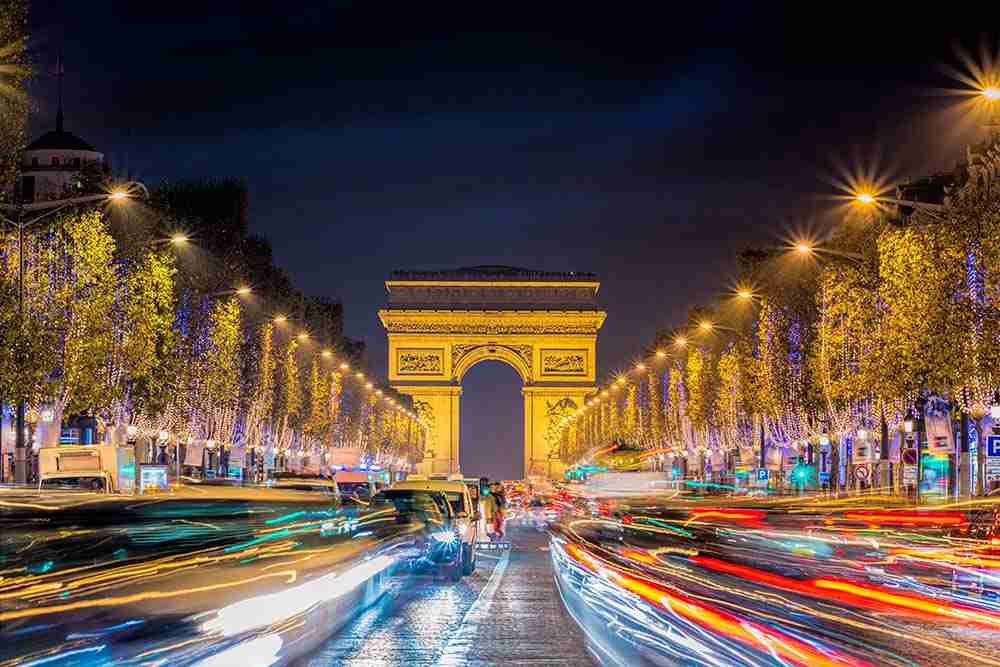 Paris prides itself on being one of the few major cities where there are no frequent tourist traps. Just like in any other large city, you should watch your belongings in crowds, because pickpockets are everywhere and avoid walking alone on streets at night.

Some guests complain that some places are too crowded or too expensive, but it is an individual decision of each person to avoid or visit these places and cannot be called a tourist trap.

As a tourist in Paris, you can feel completely comfortable and need not fear tourist traps.

Is Paris dangerous at night?

Paris is safe at night. Like any large city, it offers the usual night-time attractions such as restaurants, movies, theaters, concerts and clubs, but watch out for pickpockets. The metro is also safe at night.

What time do people go out in Paris?

Parisians usually start going out around 6 pm to enjoy a drink after work. Then, they have dinner at 8 pm, followed by the pre-party between 9 and 10 pm in a bar. The clubs usually start to fill up around 1 am and do not close until the morning hours.

What are the best districts to go out in Paris?

Saint-Germain is known for its bistros, pubs and gourmet restaurants, the Latin Quarter is where students meet, the Bastille district is trendy, Montmatre is known as the artists' quarter, Moulin Rouge is on the edge of Place Pigalle, the entertainment district with a somewhat dubious reputation.

What is the dress code when going out?

Parisians like to dress chic. High-class clubs often have a strict door policy, so it's better to do without jeans and t-shirts. In the techno clubs, however, sport shoes are no problem.

What else can I do in Paris? Here are plenty of ideas.