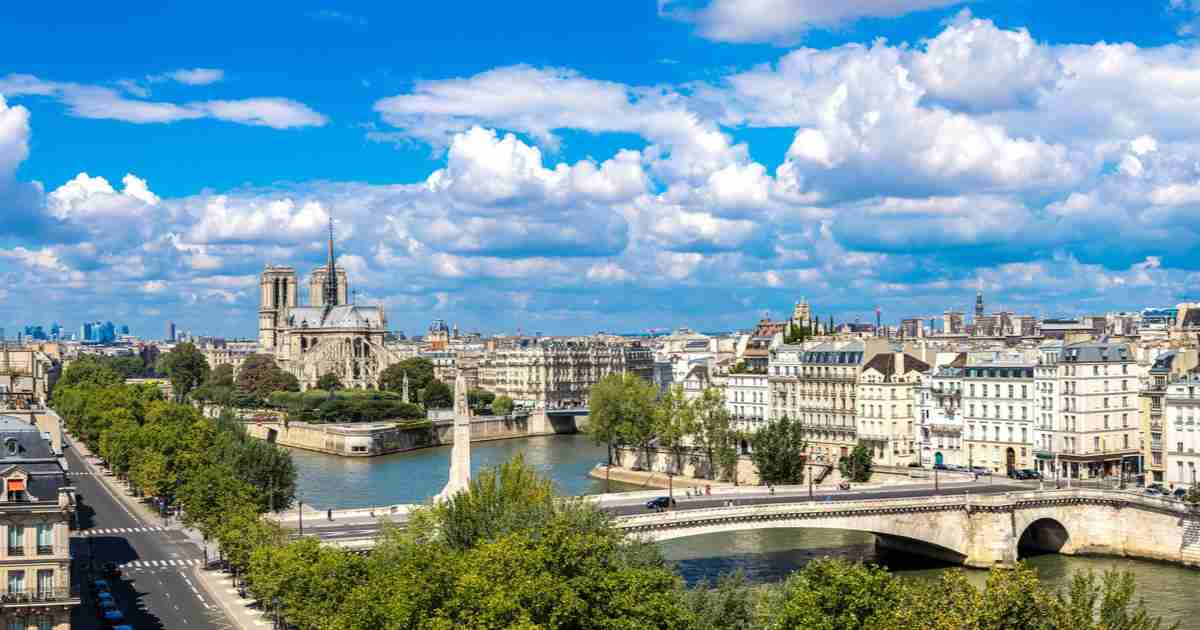 In Île de la Cité, you will find yourself in the most central place of the city. In fact, it even marks the center of Paris in geographical and historical terms.

This is why the oldest archaeological findings from ancient times and the main medieval cathedral of Paris are all to be found around here. Île de la Cité, close to the Latin Quarter, offers many main attractions and is a pleasant neighborhood to visit key attractions in Paris.

One thing is certain, the long past of Paris still shows itself here and you can be a witness of it! Let's discover the area in detail.

What is Île de la Cité?

The term "Île de la Cité" basically translates to the City Island that refers to a small natural islet. It connects both halves of Paris called the Right and Left Banks via several bridges. The ancient Roman ruins, the remains of medieval Palace of French Kings and main churches in Paris were all located here.

There is a second island as well just behind that one, known as l'Île Saint-Louis and named after the King Louis IX. It also attracts large numbers of visitors. It is also quite interesting with its authentic civic architecture and old houses and hotels on the way.

How Can I Get to Île de la Cité?

Because it is literally the mid-point of Paris, l'Île de la Cité is easy to reach by walking 5 to 10 minutes from Saint-Germain, Le Marais, and the Latin Quarter.

If you are coming by metro-

Here is a map to locate l'Île de la Cité in Paris.

What Can I See in Île de la Cité?

First of all, the silhouette of the island forms the classic skyline of timeless Paris. So, whichever side you are approaching from, you may have a piece of a great sight.

For example, once you come from the Louvre Museum, the majestic Pont Neuf bridge welcomes you first and the remaining parts of the medieval palace covers the flank towards the Chatelet.

Also you will find a large number of monuments, bridges, and churches to visit.

Let's see what they are.

Best Things To Do in Île de la Cité

Here are the top sights a traveler could visit while a walk around in the middle of Paris.

Even before the Notre-Dame Cathedral was constructed, the two main churches in Paris were in the same area, where you can see the point-zero mark on the ground in front of the church. Now the glorious towers of Notre-Dame welcome every visitor to Paris once they arrive in the heart of the city.

Additionally, do not forget to gaze on the astonishing statues around and above the gates from outside. Inside, among many other things, the rose shaped stained glass windows.

Important Note : After the terrible fire in 2019, there is no access to interior of the building, the towers and part of the surrounding areas. Read updated information about the Notre-Dame Cathedral.

Yet, another big surprise is under the ground here. The oldest traces of ancient history are exhibited under Notre-Dame in Ile de Cité. The Crypte Archéologique sign marks the entrance to the 2,000 year old findings from the Roman Empire. Just the layers of history...

Tickets and Admissions for the Towers of Notre Dame Cathedral

After the restoration following the infamous fire, the square in front of the cathedral (parvis) has just been reopened. But the interior and towers are still not open to visitors. For any further information, please check our page about updates concerning the Notre-Dame Cathedral's situation.

Tickets and Admissions for the Archaeological Crypt

Since the island had once been the heart of the city, the remnants of royal buildings are still around.

Conciergerie had ironically served the royalties in the medieval times, but it was used as well as a courthouse and prison during the revolution.

Just next door, Saint-Chapelle was the most prestigious shrine for royals that still stuns the visitors today.

On the same side of this island, the bridge connects to the Right Bank where you can reach the impressive Hotel de Ville (Town Hall) building, Le Marais neighborhood, and the Louvre Museum.

Tickets and Admissions for Conciergerie

Tickets and Admissions for Saint-Chapelle

Get more tickets for important monuments, museums, and entertainment through our official Paris Ticket Shop here.

If you direct yourself towards the pointy western edge of the island, you can walk through a royal square and a four century old bridge that is called Pont Neuf. This latter one is not only a landmark in the city landscape but also for French history. You can see the statue of King Henry IV on horseback in the middle.

Speaking of the bridges, Pont Saint-Michel opens up to the Left Bank where you can reach areas like Saint-Germain, and the Latin Quarter. One of the bridges at the east is called Saint-Louis and connects the other small islet bearing the same name as the Crusader King.

How Do I Discover Île de Cité in Paris?

There are many guided tours in Paris. Our recommendation is having one in your smart phone and do it in your own way. Discover the heart of Paris at your own pace with exclusive Paris discovery products including numerous Audioguides and Priority Entrance Tickets !

To discover other neighborhood in Paris, check our following articles.