Visit the World’s Most Famous Cemetery, Père Lachaise in Paris 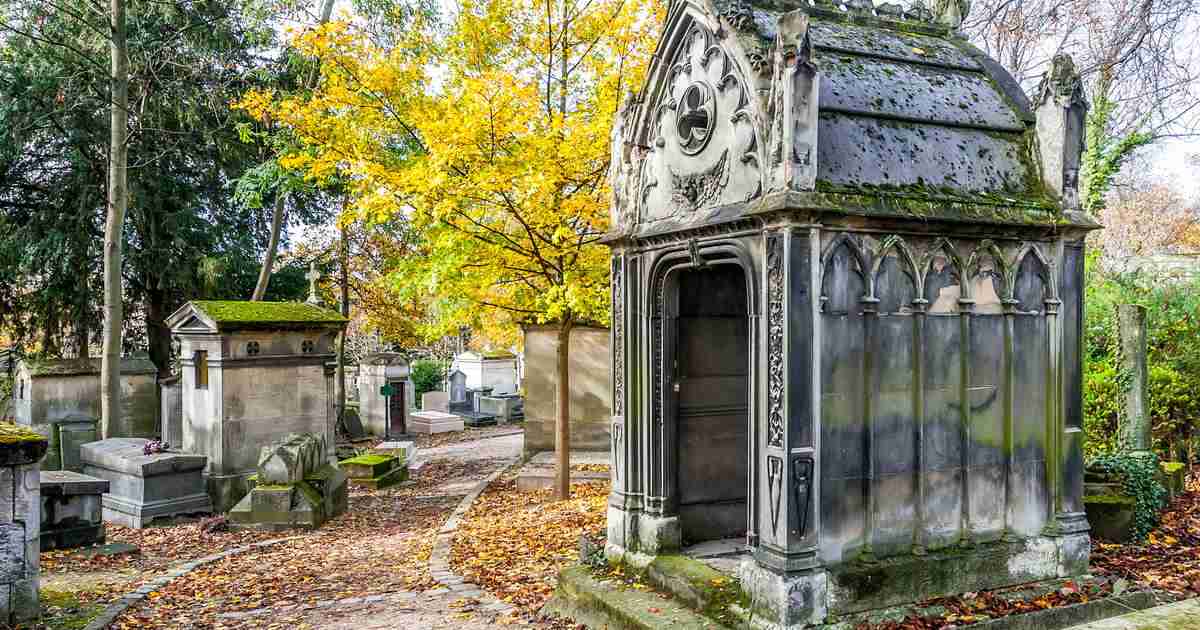 Although it might seem inappropriate to visit a cemetery with other purposes than visiting a loved one, the worldwide know Père Lachaise Cemetery is an exception.

It is in fact the most visited cemetery of the world and belongs to the long list of the best Attractions to do in Paris.

Called just Père Lachaise by the locals, this mystical place spread over 43 hectares is the largest green space of the French capital and contains more than 70 000 burial plots, including many celebrities who inspired the world with their works or inventions.

In this article, we will guide you through all the useful information to know concerning the Père Lachaise Cemetery.

table of contents
1.
What can I do ?
2.
Which Famous People are Buried in the Cemetery ?
3.
Entrance, Tickets and Tours
4.
How to get there ?
5.
FAQ (Frequently Asked Questions)
6.
History of the Cemetery
7.
Paris Tours & Tickets
8.
Related Articles:

What can I do at Cimetière du Père Lachaise ?

Walking in the largest park and largest cemetery of Paris under more than 5 000 trees is not just a walk but an inward journey. It gives an open-air museum feeling to visitors with charming sculptures on the tombs. There are many different funerary art styles like gothic tombs, ancient mousoleums , Haussmanian style vaults.

Being so close to final resting place of these people who have left so much valuable works to the world in different fields, makes one think of life, death, creation, inspiration. This visit can be a good opportunity to meditate, pray, send intentions, draw something, write a poem or reflect on your life...

If you are "lucky", you might witness one of the 3000 burial operations happening each year in this active cemetery. 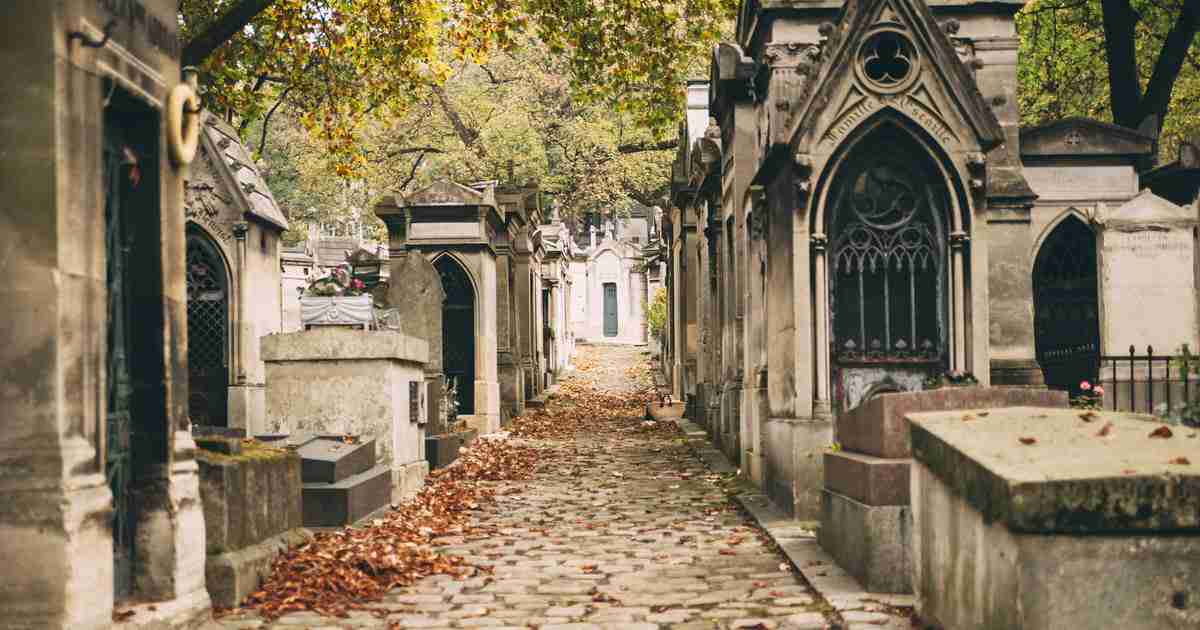 Which Famous People are Buried in Père Lachaise Cemetery ?

"Life is too important a thing ever to talk seriously about it."

The Ancient Greek inscription on the plate at Jim Morrison's tomb "Κατά Τον Δαίμονα Εαυτού" can be translated as "true to his own soul / spirit). This inscription was prepared upon the request of the singer's father who had great intrest in Ancient Greek language and textes.

If you are planning your trip to Paris right now, you can benefit from our offers in our official Paris Ticket Shop. We have great handy offers with Skip the Line Entrance Tickets to every important museum of Paris. Enjoy an easy trip to Paris ! 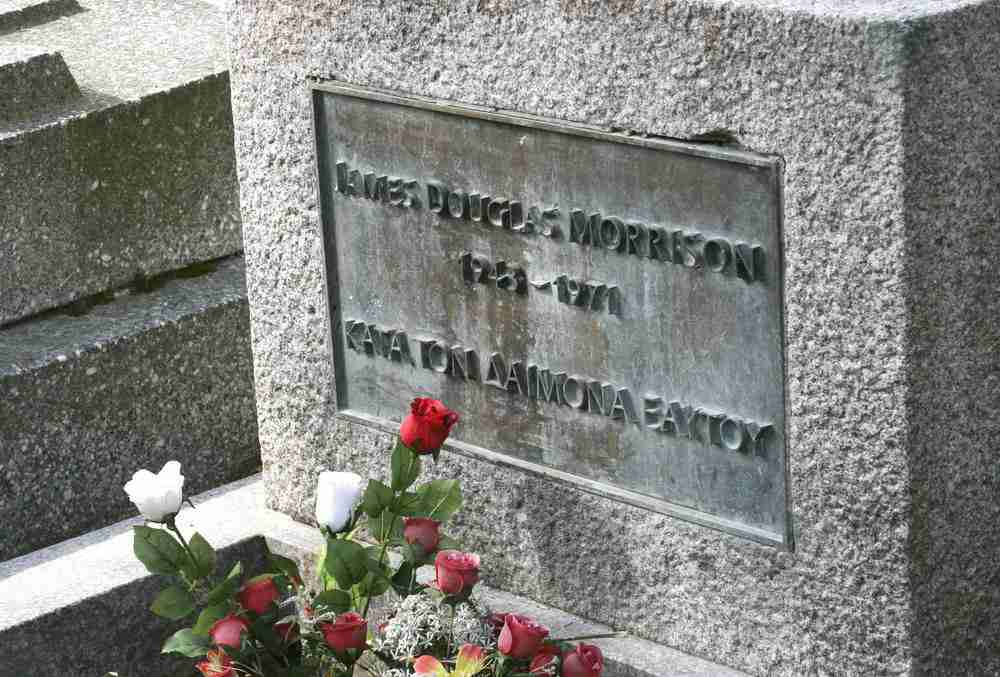 How to get to Père Lachaise Cemetery in Paris ?

Cimetière du Père Lachaise is located in the 20th arrondissement of Paris.

There is not any fee to see the cemetery.

Can you get buried in Pére Lachaise?

Pére Lachaise is still an operating cemetery accepting only Paris citizens who lived there.

Whose graves are the most visited at Cimetière du Père Lachaise?

We can say the graves of Oscar Wilde, Jim Morrison and Frederic Chopin are the top visited at Pére Lachaise. 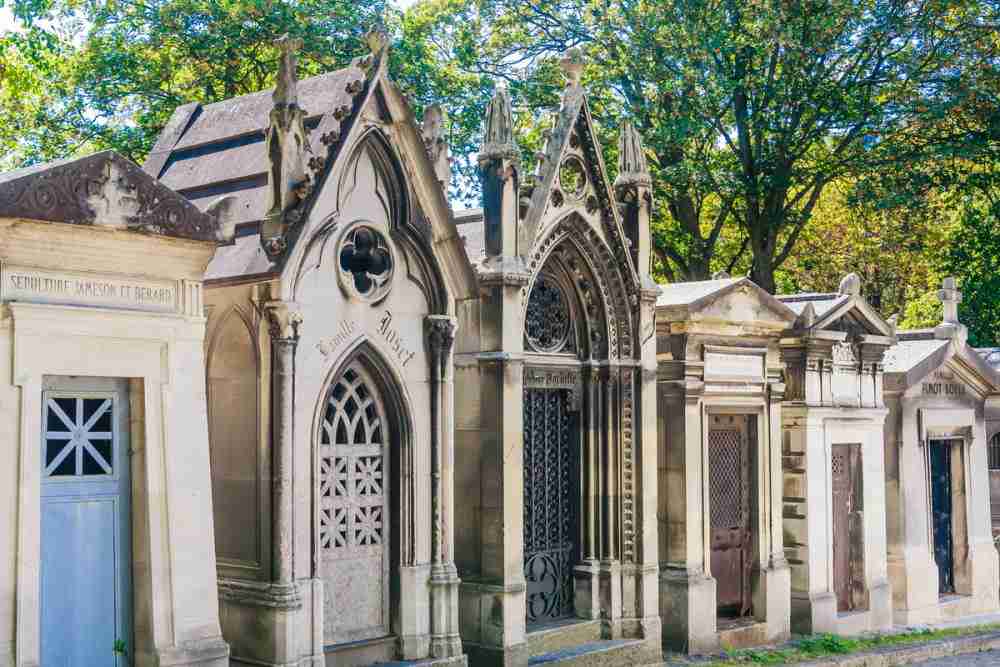 The cemetery spreads on the slope of a hill once known as Champ Evêque. There lived a prosperous merchant during the 15th century. The house posessed by the Jesuits and served as their shelter in the 17th century.

The name of the cemetery was given by Nicolas Frochot, Prefect of the Seine, as "Père La Chaise" who resided at this area. Father La Chaise was a Jesuit royal confessor to the Sun King, Louis XIV.

Napoleon the Great ordered the construction of the cemetery in 1804 and 17 hectares of the hill were purchased by the city of Paris. The urban planner Alexandre-Théodore Brongniart became the winner of the competition by bringing the best plan to solve overcrowding graveyards in the city center.

At first the citizens were unwilling to bury the dead into this cemetery on this silent hill far from eye. It was hard to convince Parisians, especially the upper class to be buried here. They made an excellent PR by raising the price of the plots here so only the wealthy could afford them. The efforts of the governor Nicolas Frochot paid well and the public interest increased with the entombing of noble people in a short time. Napoleon had the remains of Louise de Lorraine, wife of Henri III transferred to the new cemetery.

Currently there are over 1 million bodies buried in Père Lachaise . Also there are remainings of many people in the columbarium. The crematorium section has its own administration.