7 Best Squares to See in Paris 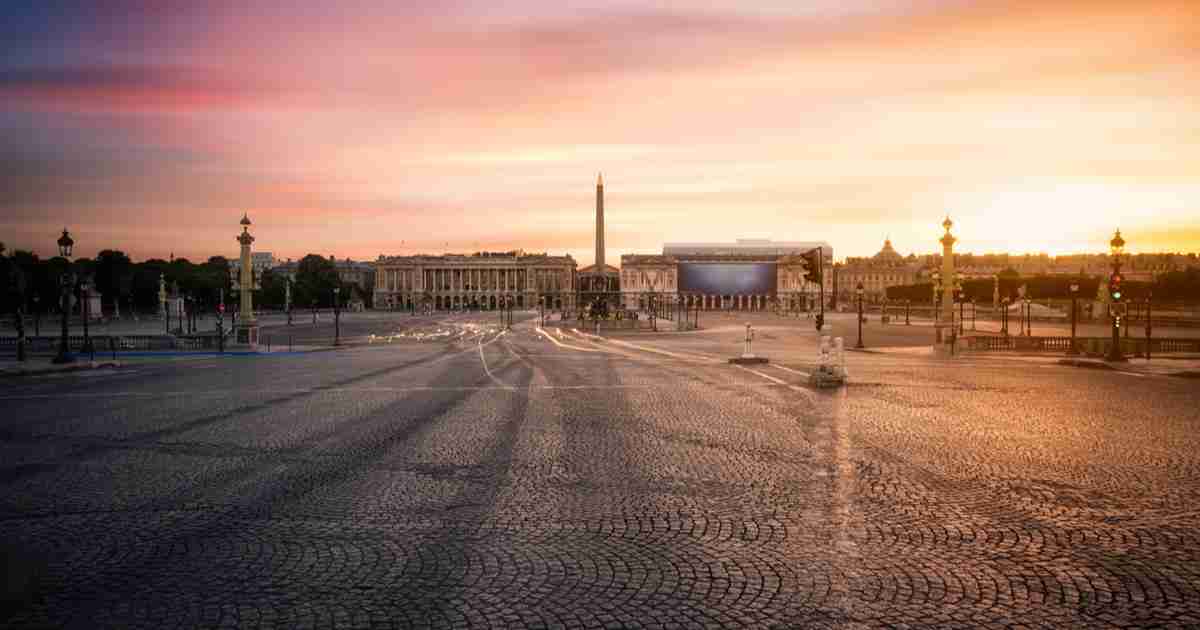 We can easily count many of the squares in Paris among the "best known squares in the world".

Those squares having so many historical monuments around them are alive for hundreds of years telling us so much either secretly or explicitly.

This article will tell you about the top beautiful squares in Paris where the heart of the city beats. Also discover the 7 Best Panoramic Views of Paris. 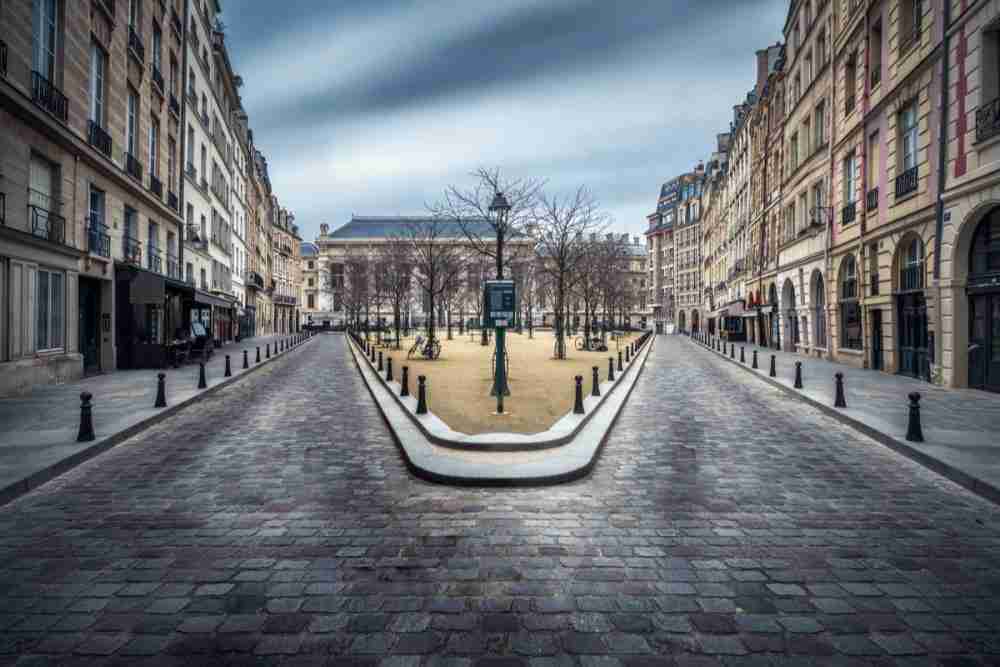 It is the second public square built in the 17th century in Paris after the Place Royal (Place des Vosges) under the orders of Henry IV. The square was named to honor his son Louis XIII who was at that time the "Dauphin" of France that means the eldest child of the king, the heir to the French crown.

The square has a triangle shape allowing access to the Pont Neuf, the bridge connecting two banks of the Seine. It is a very peaceful resting place under rhe chestnut trees ,hidden from the mad crowds only a few minutes to Notre Dame. 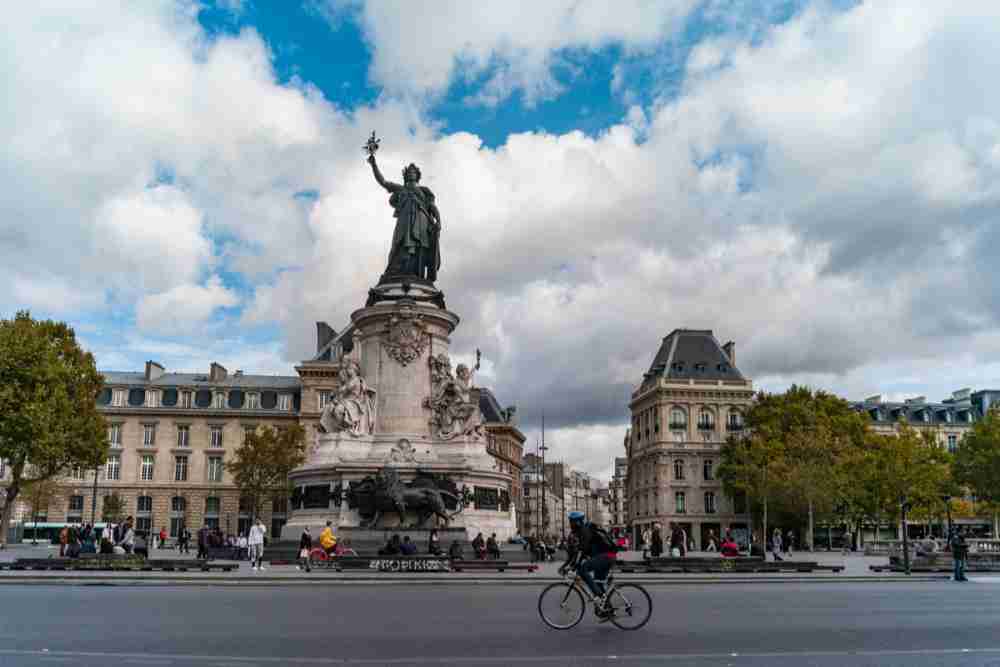 Located in the junction of several important arteries, this is a very lively place day and night surrounded by cafes, bars, restoraunts, shops and many more. It is a perfect choise to go out at night with lots of entertainment venues, where the sounds of many styles of music is heard.

A statue of Marianne, the symbol of French Revolution is standing in the center of the square. 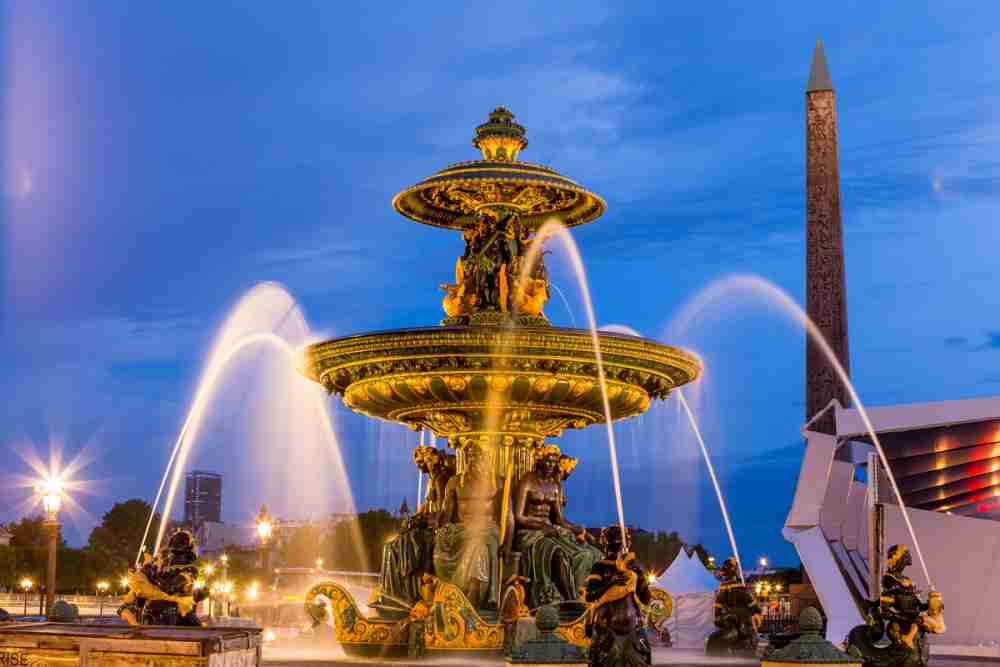 Located at the eastern end of the Champs-Elysées, in the 8th arrondissement of Paris, Place des Concorde is the largest square with an area about 19 acres.

The square became a bloody scene during the French Revolution period with the installation of guillotine. It was placed there temporarily at first to kill the thieves of the Crown Jewels in 1792. Then many public executions of the important people such as Queen Marie Antoinette, Princess Elizabeth, King Louis XVI, Georges Danton and many others followed each other. It was therefore called as Place de la Revolution before.

The 3.000 years old Obelisk of Luxor in the center of the square was erected there in 1836 by the King Louis-Phillipe. The statues symbolizing the French cities are placed at the eight edges of the square. 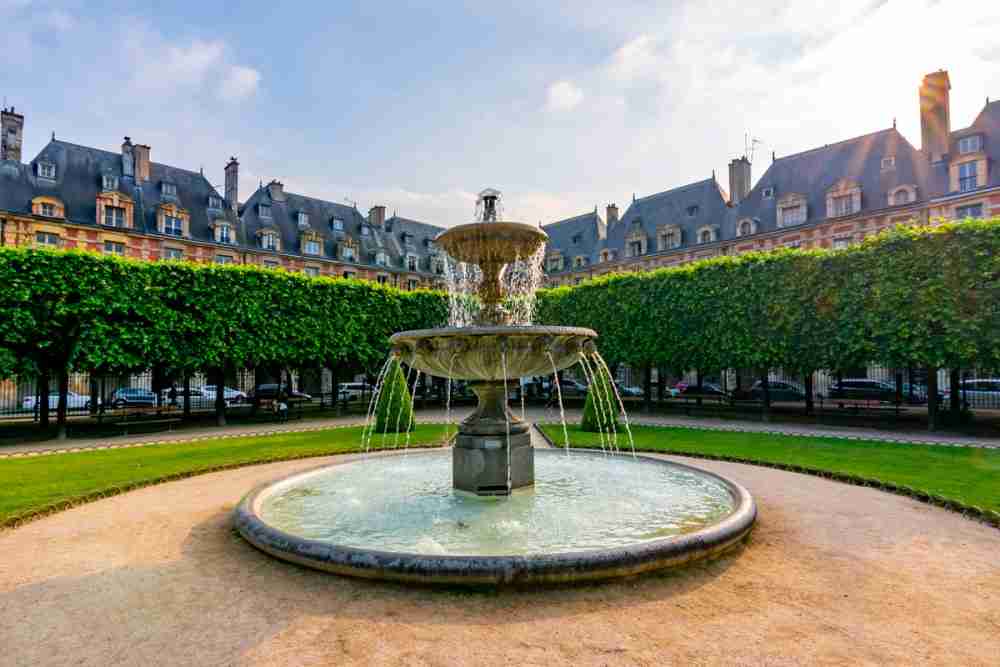 Place Royale is located in the Le Marais district. Completed in July 1605, it is the oldest planned square in Paris. There are magnificent fountains adorning the square as well as a marble equestrian statue of Louis XIII.

The square is surrounded by two storey houses with red bricks from each side, that was built symmetrically.

It was the residence of many important personalities from the political and artistic world. One of the famous residents in the neighborhood was Victor Hugo who settled in a mansion here with his family in 1832. Today, it is a museum where can be seen his dining room, living areas and the bedroom he died. 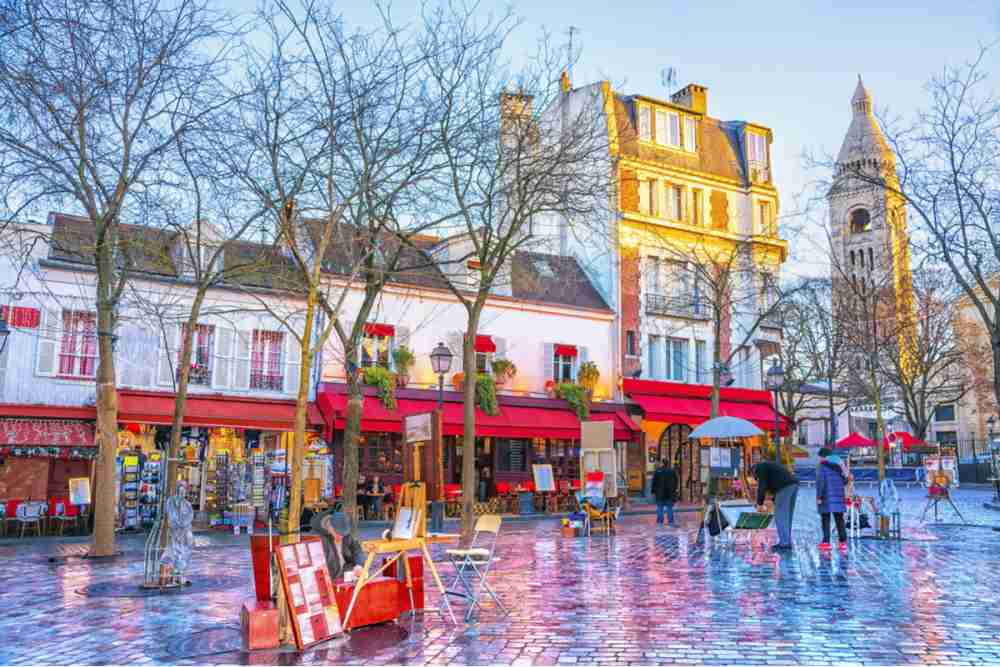 Place du Tertre is a small, popular and therefore usually very crowded square in the 18th arrondissement of Paris. It is a must seen place in Montmartre neighborhood where many talented street artists set up their easels for the tourists everyday.

It was the place where many forms of modern art arouse by a number of important artists including Monet, Renoir, Picasso, Van Gogh and many other in the 19th - 20th centuries. Montmartre Museum gives a better idea about the history of Montmartre and the bohemian lifestyle of the artists, poets and songwriters. 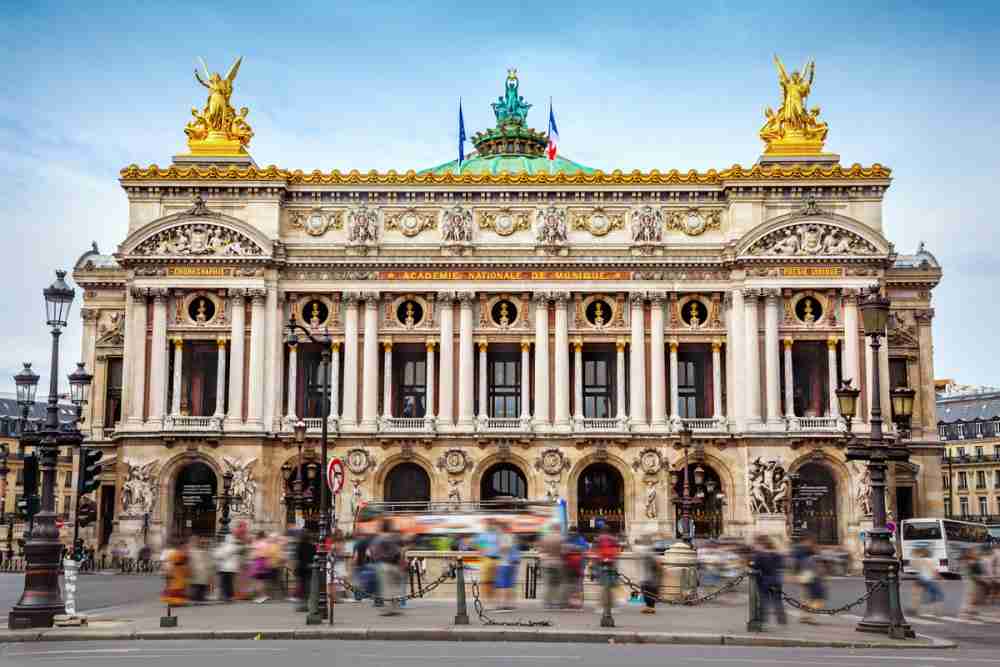 The Opera district is at the 9th arrondissement of Paris surrounded by the head offices of many business companies, banks and luxury shops.

It was named after the opera building (Palais Garnier) dominating the square which is near the Galleries La Fayette, one of the biggest shopping centers in Paris. 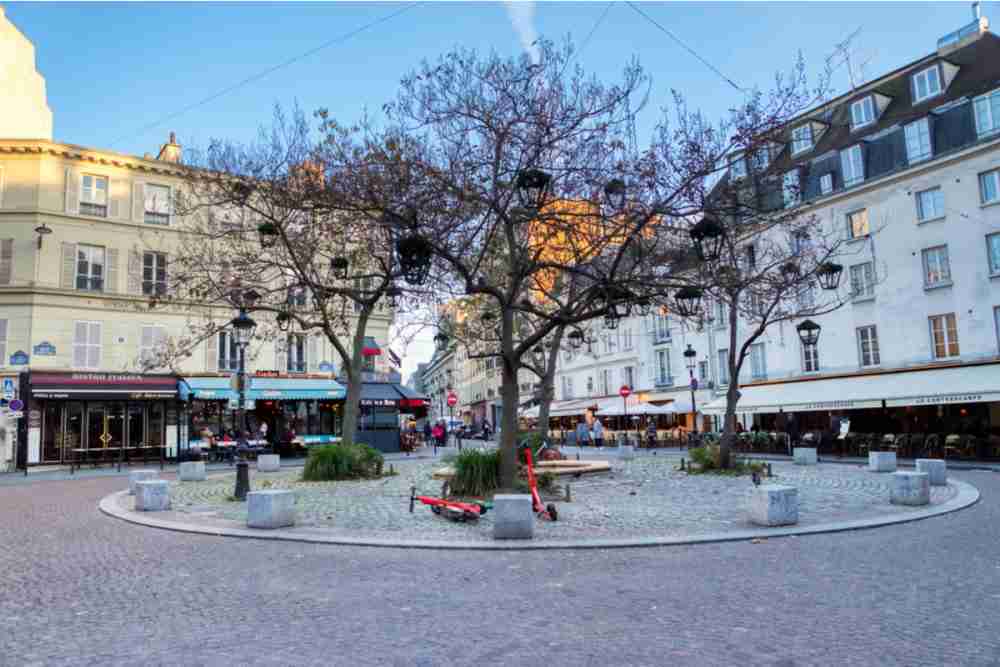 Place de la Contrescarpe is one of the oldest and liveliest squares in Paris located in the 5th arrondissement near Latin Quarter.

In the Middle Ages this area was laying outside the city walls. It was formerly a working class district, mostly inhabited by lower class. It is gentrified through the years and became a very popular and colorful place. There are very lively cafes, bars and shops that are busy day and night.

Having a public fountain in the center, the square is at the confluence of four administrative districts, Sorbonne, Val-de Grace, Jardin-des Plantes and Saint Victor.

Don't miss to see the apartment where Ernest and Hadley Hemingway lived on the rue du Cardinal Lemoine ( number 74) in the early 1920's. The writer describes the square in "The Snows of Killimanjaro".

What to see around : Quartier Latin, Pantheon, Basilica of Saint-Étienne-du-Mont, Jardin des Plantes

Now you have all the important squares of Paris to visit in mind. If you want to continue the exploration, you can check these articles :

Guide to Jardin des Plantes, the Botanical Garden of Paris